Looking to purchase a handgun, but not sure what caliber is best for you? In this article, we will go over some of the most common handgun calibers and make some recommendations for you about when to use each one.

Handguns are very widely used. They are commonly used for home defense, personal defense, and can be used for hunting as well. There are tons of different calibers out there, and it can get a little confusing.

The Guide to Understanding Handgun Calibers

We’ll get this started with common pistol calibers, from small to large.

Yes, the rimfire cartridge commonly found in bolt action rifles. While not all that common, .22LR can be found in both pistols and revolvers. They don’t see much personal defense or home defense use because the round is so small, but they are pretty fun for just plinking around.

Due to the fact that the ammunition is readily available and pretty inexpensive, most people like their .22LR pistols and revolvers for range shooting. However, some people do decide to carry them. You know the old saying, the gun on you is better than the one in the gun safe. If you’ve got nothing else, carry a .22LR by all means, but you can certainly do better. 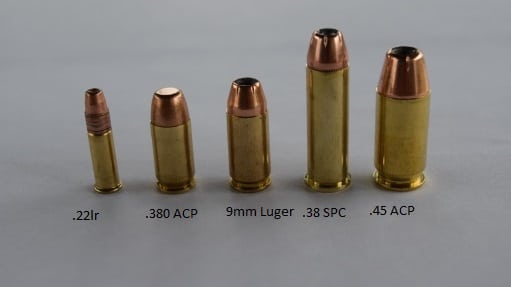 Next up we’ve got another small round, the .380 ACP. These bullets are .355 inches in diameter, weigh between 90 and 100 grains, and are fired around 1000 feet per second. These projectiles are still very small, but the round is barely suitable for personal defense.

This round is commonly found in really small frame concealed carry pistols. Many of the pocket pistols and secondary weapons that you see are chambered in .380 ACP. I carry a .380, but only in the summer when people are wearing less clothing. I would definitely recommend 9mm over .380 for personal defense, but .380 is acceptable.

However, for home defense, you aren’t worried about the size of the weapon, so I would recommend a larger caliber projectile.

Now we’re getting into more widely used rounds. 9mm is one of the most common rounds in the world. The bullets are .355 inches diameter as well, but they weigh 115 to 130 grains and are fired around 1100-1200 feet per second. These bullets are much larger and are fired faster, so this is a better round for any defense purposes.

9mm is a great round for range shooting and any defense purposes.

You can get a single stack carry weapon in 9mm, but also a double-stack weapon with a 17+ round magazine capacity for home defense. For range shooting, the recoil is manageable, and the ammunition isn’t that expensive.

While this round is not nearly as common as it used to be, .40 Smith & Wesson is a pretty good round. The projectiles are .4 inches in diameter, weigh between 135 and 165 grains, and are fired around 1100 feet per second.

.40 S&W is sort of on the way out, due to the fact that 9mm offers such similar performance in a smaller frame. 9mm is a smaller round, so you are able to fit a few more in a magazine, while achieving similar ballistic results to the .40 S&W.

However, despite this fact, I still think that .40 S&W is a great round for any defense uses. I would shoot 9mm at the range over .40 S&W, but I feel very comfortable carrying around a .40 S&W weapon. There aren’t quite as many weapons out there, but they are suited great for personal and home defense uses.

Now we’re getting into much larger cartridges. These projectiles are .451 inches in diameter, weigh between 165 and 185 grains, and are fired around 1050 feet per second, dependent on the round.

These are large, heavy bullets that are fired pretty fast. For this reason, they are great for defense uses and as a hunting sidearm.

Due to the size of the cartridge, there aren’t many .45 ACP weapons that are meant for concealed carry. There are a couple, but your magazine capacity is going to be extremely small. I would recommend .45 ACP for home defense, such as in a full-size 1911. This same weapon would be decent for a hunting sidearm, but slightly larger cartridges might perform a little better for this. .45 ACP will take care of smaller targets, but if you’re going to hunt deer with a handgun, you probably want a bigger round.

I’m not going to say you shouldn’t shoot .45 ACP at the range, but the ammunition is pretty pricey. Your wallet will probably thank you if you shoot a smaller cartridge.

This is the largest pistol cartridge we will talk about. There are some exceptions out there (looking at you, Desert Eagle), but 10mm is the largest pistol cartridge that is really commonly found. The projectiles are slightly smaller than .45 ACP, with a diameter of .40 inches. However, they are usually about the same weight but are fired at 1200-1300 feet per second.

These projectiles generate a lot more energy because they are moving so much faster. In terms of terminal performance, .45 ACP is a larger bullet, so they create larger holes and damage more tissue, but these bullets are moving faster. It’s almost a tie between the two for which one does better in terms of ballistics.

However, I prefer 10mm for hunting because it retains energy over a longer distance. 10mm performs similarly to .45 ACP in terms of handgun hunting. Both are decent cartridges that can put a deer down, dependent on your shot. Personally, I like 10mm better due to the flatter trajectory, but both are decent.

Similar to the .45 ACP, 10mm is decent for defense uses. The round has a lot of recoil, so I wouldn’t recommend it for plinking at the range.

Let’s get into revolver rounds now.

Note: If you have a handgun, i think you should have best handgun safe to keep it safe. It’s very important.

These projectiles are .357 inches in diameter, weigh between 125 and 150 grains, and are fired around 950 feet per second. In terms of ballistics, these bullets are larger and heavier than 9mm bullets but aren’t fired as fast. For the sake of comparison, it definitely outperforms .380 ACP.

Due to the similar performance, I would recommend this for the same uses as 9mm. It’s great for home defense, self-defense, and range shooting. It’s a pretty commonly carried cartridge because there are some tiny revolvers that are available in .38 Special.

Up next is another great defense round. The bullets are also .357 inches in diameter and are commonly 125 or 158 grains, but they are fired much faster than .38 Special ammunition. These rounds are fired closer to 1200-1400 feet per second. For this reason, it is an even better defense round. It will do a ton of damage in tissue.

The revolvers are usually not that large, so you can carry them somewhat easily. They are great for home defense as well, and would definitely be fun to shoot at the range.

These bullets measure .429 inches in diameter, weigh from 240 to 300 grains, and are fired between 1200 and 1400 feet per second. As you can see, these are some giant rounds that are being fired extremely fast.

While they aren’t as wide as .45 ACP pistol projectiles, they are significantly more heavy, and are fired significantly faster. This round is really devastating. However, as you can imagine, the cartridge itself is pretty large. It’s fired from much larger weapons, so you won’t find many people trying to conceal this.

When you get into these much larger revolver cartridges, you get more into handgun hunting. Due to the fact that the projectiles are so large and are fired so fast, many people do different kinds of hunting with these revolvers.

.44 Magnum is the first of our revolver cartridges that I would recommend hunting with. It will put down all different kinds of animals with relative ease. It’s an excellent choice.

However, this combination of size, weight, and speed also means that the round is good for home defense. While it’s certainly not my first choice to shoot at the range, it is a great revolver to have in the nightstand.

Similar to the pistols, we won’t talk about the absolute largest revolver cartridges available (such as .460 S&W Magnum), but we will talk about .454 Casull, which is absolutely giant. The bullets are .452 inches in diameter and are usually over 300 grains. They are fired at 1500 to 1600 feet per second.

Once again, these are fired out of huge revolvers. You could definitely hunt with these, and you can definitely defend your home with it as well. They are huge bullets and will do all kinds of damage within a target.