What’s Rifle in Wind River Movie? Is That Good?

Wind River is a newer movie that is part western and part murder mystery. It takes place in Wyoming, and there are a few scenes where rifles are a significant part.

The main character is shown hunting coyotes with a bolt action rifle, but the most prominent weapon is the classic lever action used.

Here is trailer of movie:

What is Lever Action?

As the name might imply, lever action rifles utilize a lever to chamber the next round.

Generally speaking, the weapons have somewhat of a “loop,” if you will, that you put your hand in. This part of the weapon usually rests on the handguard of the weapon, to make for a very natural grip. They are generally just below the trigger guard.

After you pull the trigger, you make sure your pointer finger is out of the trigger guard, and then move the lever forward and then back to the starting position. This natural motion chambers the next round, and you are ready to shoot again.

Check out this YouTube animation that shows how a lever action works!

They are excellent hunting rifles, because they are generally somewhat shorter, and can accommodate very large calibers. The reliability and accuracy also add into this. Some common lever action companies are Marlin, Colt, and Henry.

Which One Was in the Movie?

Now that you know what lever action rifles are, and what they are good for, I’m sure your wondering which one was in Wind River.

The rifle in the movie is a Marlin Model 1895SBL. 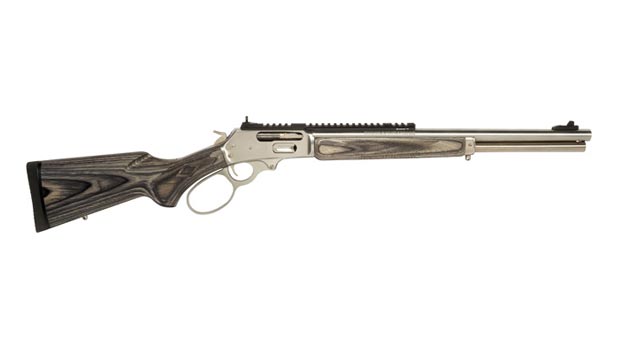 This weapon is chambered in .45-70 Government, and has a 6 round capacity. It is a very sleek looking weapon, as I’m sure you noticed in the movie, but it is also an excellent big game rifle.

On top of its great looks, it also has plenty of stainless steel parts for durability. The laminated stock will match this durability.

Should I Get It?

Dependent on what you are trying to do, absolutely! This weapon is an excellent quality lever action rifle. It is on the expensive side, but would absolutely excel as a big game hunting rifle. The accuracy, reliability, and generally small size, make this an absolutely awesome choice.

You will need a scope for the rifle, but the picatinny rail makes it extremely easy to mount most scopes. Check out best scope for .308 rifle to choose one.

All in all, lever action rifles are fun to shoot and are excellent hunting rifles. Thanks to their smaller size, outstanding reliability, and well-known accuracy, they are an awesome option for hunting. They are also commonly available in very large calibers, while still being relatively small in size. For example, the Marlin Model 1895SBL pictured in Wind River is chambered in .45-70 rifle, but is only 37 inches long. That is a lot of punch packed into a small package.

For these reasons, the Marlin Model 1895SBL is an excellent big game hunting rifle. Be sure to check one out to see how you like lever action rifles!