How Far Can a Bullet Travel? (4 Factors) - Daily Shooting | Shooting Tips And Reviews
0 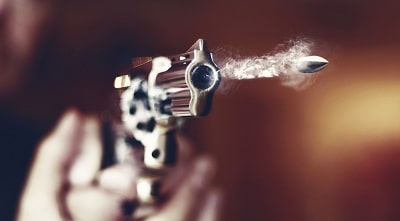 How Far Can a Bullet Travel? (4 Factors)

Wondering how far can a bullet travel?

The projectile of a rifle cartridge, often called a bullet, can travel at vastly different distances, dependent on a few key factors, that can be dumbed down to basic physics.

The main factors that will affect how far the bullet can travel are: projectile weight, muzzle velocity, trajectory, shape of the bullet, and environmental factors.

However, how far downrange would the fired bullet be?

The reason for this is that the heavier projectile will have less drop, which means it will travel further before its velocity slows down enough for the resistance of the air to actually significantly slow the bullet down.

The reason for this is the same as the previous one. If the bullet has a greater speed, it will take longer for the air resistance to slow the bullet down.

The primary things that will affect the muzzle velocity are the specific cartridge used and the barrel length.

Shape of the Bullet

Increased resistance on the bullet slows it down faster, which then decreases the distance it can travel.

At higher altitudes, air is thinner, so the bullet will travel further.

At lower altitudes, the air is more dense, so the bullet will experience more resistance, and won’t be able to travel as far.

Similarly, cold air is denser, so a bullet will travel further in warm air.

Wind can also affect how far a bullet can travel, as it will blow the bullet side to side as it flies through the air. To preserve ammunition, you should have the best gun safe with dehumidifier, it will help you ammo have good quality.

As you can see, there is no easy, one-size-fits-all answer to this question.

It is entirely based on the other factors.

Thinking about these factors, you will be able to easily decipher what has the most impact on how far a bullet travels, but there is not one number answer to give.

With enough research, you could find a general idea for multiple calibers of weapons, but even then, these factors all apply.

Even if both rounds are 5.56, different rounds fired from different weapons in different environments will significantly change how far the bullet is able to travel.