How to Determine the Shot Size for Turkey? - Daily Shooting | Shooting Tips And Reviews
0 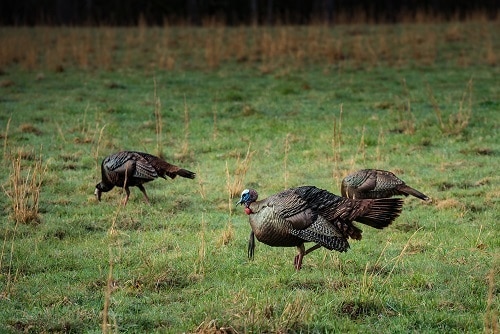 How to Determine the Shot Size for Turkey?

When it comes to hunting, you have a few different choices you have to make before you even fire your gun. The first is what are you going to hunt, but if you are reading this, then you have already chosen turkeys. The next is what kind of gun to use, and the final thing is what shot size are you going to use in that gun. In this article, we are going to address the shot size question when hunting turkeys. After reading this article, you will know how to answer the question of what is the best shot size for turkey hunting.

What is shot size?

How to determine the best shot size for turkey?

So, for turkeys what is the best shot size? Well, a lot of people use No. 6s, No. 5s, or No. 4s. The number six is actually the smallest, and the number four is the largest with number five in the middle. No. 6s measure 2.79-millimeter diameter, No. 5s measures the 3.05-millimeter diameter and No. 4s measure 6.1-millimeter diameter. So, now that you know the sizes which one should you use? Well, the common answer is which one patterns the best in your gun. This answer is pretty accurate, and we will go into detail on it shortly, but this isn’t the only factor to consider.

The other thing you need to consider when choosing a shot size for hunting turkeys is the size of turkey you will be hunting. In some areas turkeys are bigger than in other areas, so you need to choose a shot size that matches the size of your turkeys. If the turkey is large, then you will need the larger pellets to get proper penetration into the turkey, but if the turkey is small, then you can use the smaller shot size. When picking a shot size, you want one that is just big enough to bring down your target, but not so big that it ruins a bunch of the meat.

So, now that you know the turkey size plays a big effect, because if you are hunting small turkeys, then you want a small shot size, but for bigger turkeys, you need a bigger size we will get into what patterning is and how it effects picking your shot size. When you pattern your gun, it is setting in up and practicing with the rounds to see how the pellets are going to come out of the shell.

You want the shot to hit the target. It doesn’t matter if you are firing larger number fours if none of the shot hits the target. The same can be said about number sixes. If you can get a bunch to land on the turkey, then you can get a kill even though they are smaller.

When patterning your gun, you will want to fire multiple rounds thru it at targets of varying distances. Normally twenty feet, forty feet, and sixty feet are used. The targets are turkey pictures, and after shooting them, you look at the target and see how many pellets made it into the target. If the pattern is a good cluster at all the ranges, then your gun is patterned, but if they aren’t on the target, you will need to make adjustments and fire some more. Due to how guns work more pellets will hit the target at a closer distance than at farther away ones. That is because the pellets spread out as they travel. Once you have your gun pattern and have around that you like how it fires from your gun that is normally the right shot size for you.

Most of the time for the size recommendations on here we are assuming you are firing a twelve gauge gun. Some people like using different sizes though so again this stress the importance of picking the shot size that works best for your gun. Generally, though each shot size has some advantages no matter the gauge, so to help you decide we will cover the advantages of each shot size.

Number six shot size is great for if you are shooting birds that are close. This is especially true if that are smaller birds. No. 6 shot gives great density in your patterns, but since they are small, they lose their ability to penetrate deep enough to kill quicker than the other sizes.

Number four shot, on the other hand, is great for distance because they are bigger and keep their killing power farther. However since they are bigger less come out and they also spread wide when traveling, so they might not provide the density you need sometimes. Also, some guns just don’t pattern No. 4 shot good.

Number five shot is in the middle. It can travel relatively far and keep its penetrating power, but also it stays tight. This makes it good for most hunting situations.

So, which shot size is best for turkey hunting? Well, the answer is that a lot of times you should carry all three between No. 6s, No. 5, and No. 4 because you don’t know the situations you will face, but if you just want to carry one then go with number 5. That is because it offers good distance while also keeping tighter patterns. However, the best thing to do before hunting is pattern your gun so you know how each shot will work in your gun and then choose the one that is best for the situation. If you have a large turkey at a long distance, you can use your number 4, but if you got a smaller turkey that is close, you could use your number 6. The key is to be prepared when turkey hunting so you can get the kill when the opportunity arises, and the best shot size for turkey hunting is the one that you have practiced with. The saying that the best shot size is the one that patterns the best is pretty true because if you get the pellets to land right, it doesn’t matter their size, you will get the kill.