What Exactly is AccuTrigger And Should I Be Using It? - Daily Shooting | Shooting Tips And Reviews
0 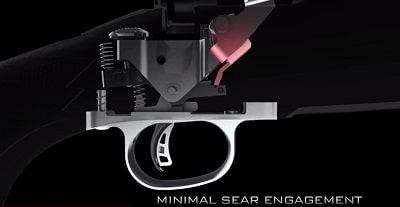 What Exactly is AccuTrigger And Should I Be Using It?

Maybe you’ve heard of AccuTrigger, maybe you haven’t. Sure, it sounds cool, but what does it actually mean? Is it just another name for any old trigger in a rifle?

In this article, we will talk about what AccuTrigger really is, and some advantages and disadvantages to using it.

Simply put, AccuTrigger is a two-stage adjustable trigger. More specifically, AccuTrigger is a specific trigger that the firearms manufacturer Savage Arms uses. If you’re hearing the term AccuTrigger, it refers to Savage Arms’ triggers, but it is also commonly used to describe other, similar triggers.

There were a few terms used there that maybe not everyone will be familiar with. First, let’s talk about what a two-stage trigger is.

Most triggers that you are probably familiar with are single-stage triggers. In this kind of trigger, there is only one motion that is made in the internals of the trigger mechanism. You pull the trigger back, and at some point, it fires. They are very simple.

The next factor of the AccuTrigger is the fact that it is adjustable. While it may seem simple, al that this means is that you can adjust the weight of the trigger pull. You can make it either easier or harder to pull the trigger, which allows you to customize it to your needs.

What are the advantages of an AccuTrigger?

Due to the fact that it is a two-stage, adjustable trigger, you will find that it is much easier to shoot.

Ever shot a weapon that you weren’t exactly sure when it was going to fire? When this happens, you subconsciously are anticipating the weapon firing, which can cause you to flinch, and shoot less accurately.

With an AccuTrigger, this is completely eliminated. You know exactly when the weapon will fire due to the positive wall in the two-stage functioning. This will prevent you from flinching, so you will be able to shoot more accurately.

Similarly, this is the same with the adjustable trigger pull. You will be able to fine-tune the amount of pull it takes to fire the weapon so that it meets your needs very precisely. These two things put together will allow you to be a noticeably more accurate shot.

However, this isn’t just with an AccuTrigger. This is applicable with any adjustable, two-stage trigger. While the AccuTrigger was one of the first, similar triggers are used in Ruger and Marlin weapons.

Should I use an AccuTrigger? 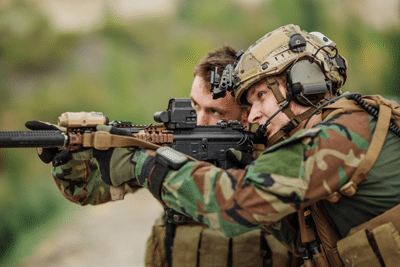 What Scope Does The Military Use

If you have never shot a two-stage, adjustable trigger, you should definitely give it a shot (no pun intended). We think that it will significantly increase your shooting abilities.

However, to say that this is absolutely necessary would be false.

If you are doing any type of precision shooting, a high-quality trigger, such as AccuTrigger, is going to be extremely important to you.

But, if you are hunting, a high-quality trigger like this isn’t exactly necessary. It certainly won’t hurt, but you will be able to get by without it.

AccuTrigger, or any other adjustable, two-stage trigger is a great idea. However, if you aren’t a fan of Savage Arms (as many people aren’t), don’t feel that using an AccuTrigger is absolutely paramount.

It will improve your shooting, but there are other choices. For those who don’t like Savage Arms, these other options would be worth looking into.