What is the Difference Between Semi Automatic vs Automatic Rifles? - Daily Shooting | Shooting Tips And Reviews
0 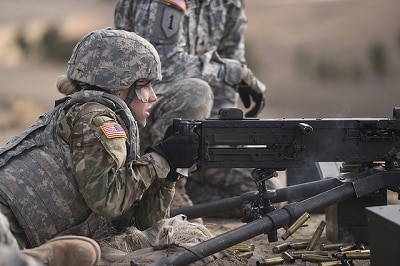 What is the Difference Between Semi Automatic vs Automatic Rifles? Are you confused by the difference between semi automatic vs automatic guns? What separates a semi-automatic gun from a fully automatic machine gun?

Both of them reload automatically, hence the ‘auto’ label.

But let’s dive a little deeper into the two types of weapons and uncover other similarities and differences, as well as uses for both semi-auto vs full-auto guns.

Semi Automatic vs Automatic: Breaking It down

What it all comes down to is the ‘action’ on the gun. This refers to the operation of how a gun fires a bullet, ejects the cartridge, and reloads the next round.

Both of these types of guns handle the reloading part in an automated fashion. But the firing is where the difference is.

By definition, a machine gun refers to the fully automated version, which will continue to fire bullets until empty. Therefore, a semi-auto cannot technically be labeled as a machine gun.

Here is a great video on the differences between semi-auto and full-auto.

Semi Automatic vs Automatic: When Both Are Commonly Used

In the United States, full-auto weapons are typically only available to the military and law enforcement agencies.

The typical armed citizen cannot walk into a gun store and buy a full-auto machine gun.

The process of obtaining one requires extensive permitting and background checks, typically in line with the needs of the police or military. Individual citizens can attempt to obtain the permitting necessary to purchase a fully automatic weapon, but there is certainly no guarantee of success. Semi-automatic guns can be purchased by citizens who pass the background check and process for obtaining one, and cooperate with any waiting periods or restrictions in the area where they live and are purchasing the gun.

This video explains how a semi-automatic gun works.

These types of guns work well with the automated reload and have a trigger conducive to quick pull and fire. Some will be recoil operated.

This refers to guns that have a locked breach, and are auto-loading. The automatic loading cycle is powered by the recoil.

The force of the shot recoils, emptying the chamber of the used casing and allowing the new bullet to load.

Others are powered by gas instead of recoil. The gas yoked from the fired round drives a piston into the weapon’s barrel. This pushes out the used shell, making room for the new one, which is automatically loaded from either the internal or external magazine by pressure.

No matter which type of power a shooter has in their semi-auto gun, no cocking or additional effort is needed to load the new round.

Here is a video on how a full-auto AK works.

Semi-auto vs full-auto: The debate between the two

There has been much conversation back and forth about whether machine guns, fully automatic, have a viable role in society. If so, what is that role?

Outside of law enforcement and military, there isn’t much of an argument that can succeed at a legal level, at least not right now. But gun hobbyists and fanatics don’t need to get all up in a tiff about it. Semi-automatic guns are honestly pretty impressive these days. What’s wrong with a little trigger finger exercise? As fast as you can pull, you can shoot round after round until the magazine is empty.

Plus, unless you’re in California or another spot that outlaws them, gun owners can employ a multi-burst trigger activator to make the shooting process even faster.

With these handy gadgets, recoil is a breeze and shooters notice a significant improvement in shooting speed without much effect on their accuracy – provided they’ve got the shoulder for increased pressure.

Plus, the skill of mastering a semi-auto is something that’s definitely worth bragging about if you can back it up at the range. Trigger masters command a great deal of respect in gun circles.

Many of today’s finest shooters use semi-automatic weapons with the speed and finesse of a machine gun – to the point that it takes a keen eye to tell the difference.

Semi automatic vs automatic rifles will remain an ongoing conversation in gun circles.

Hopefully, this article has given you a better understanding of the difference between the two, and of their important place in society. If you’ve enjoyed this article, please share across your social media channels.

Remember that next time someone at the range starts rambling about machine guns, they are probably full of it. You now can correct them on the fact that a semi-auto is not technically a machine gun. The more knowledge in the gun community, the better.

I’d love to get some fresh takes on people’s favorite semi-autos as well as machine guns, so feel free to drop a comment below with what you’re shooting. Also note what you hope to be shooting next time you get a nice bonus at work.